the paradox in life abundant

“To reconcile requires a commitment to see the face of God in the other, to feel the world from their perspective, and to place ourselves not in control but alongside the human experience and condition.”

“If we consider this (sharing suffering) the root art of reconciliation, then loving God requires a willingness to dwell alongside human suffering, to be with others in the way God has chosen to be with us.”

From Reconcile  by John Paul Lederach
Posted by Laura Hoy No comments:
Email ThisBlogThis!Share to TwitterShare to FacebookShare to Pinterest

from servants to friends

In Scripture, Jesus says, "I no longer call you servants, because a servant does not know his master's business. Instead, I have called you friends, for everything I have learned from my Father I have made known to you." (John 15: 14-15)

This Scripture speaks to a worldview shift from a service model to a friendship/community model.

Jesus says that a servant does not know his master's business. When I live in a service mindset, I often times miss the business of God..  I only get close enough to people and the needs of our community to serve them from a safe distance and in doing this, I do not come to know the master's business of transformation (in me and in others...He wants to make new creation through new community!)

moving out or moving in? 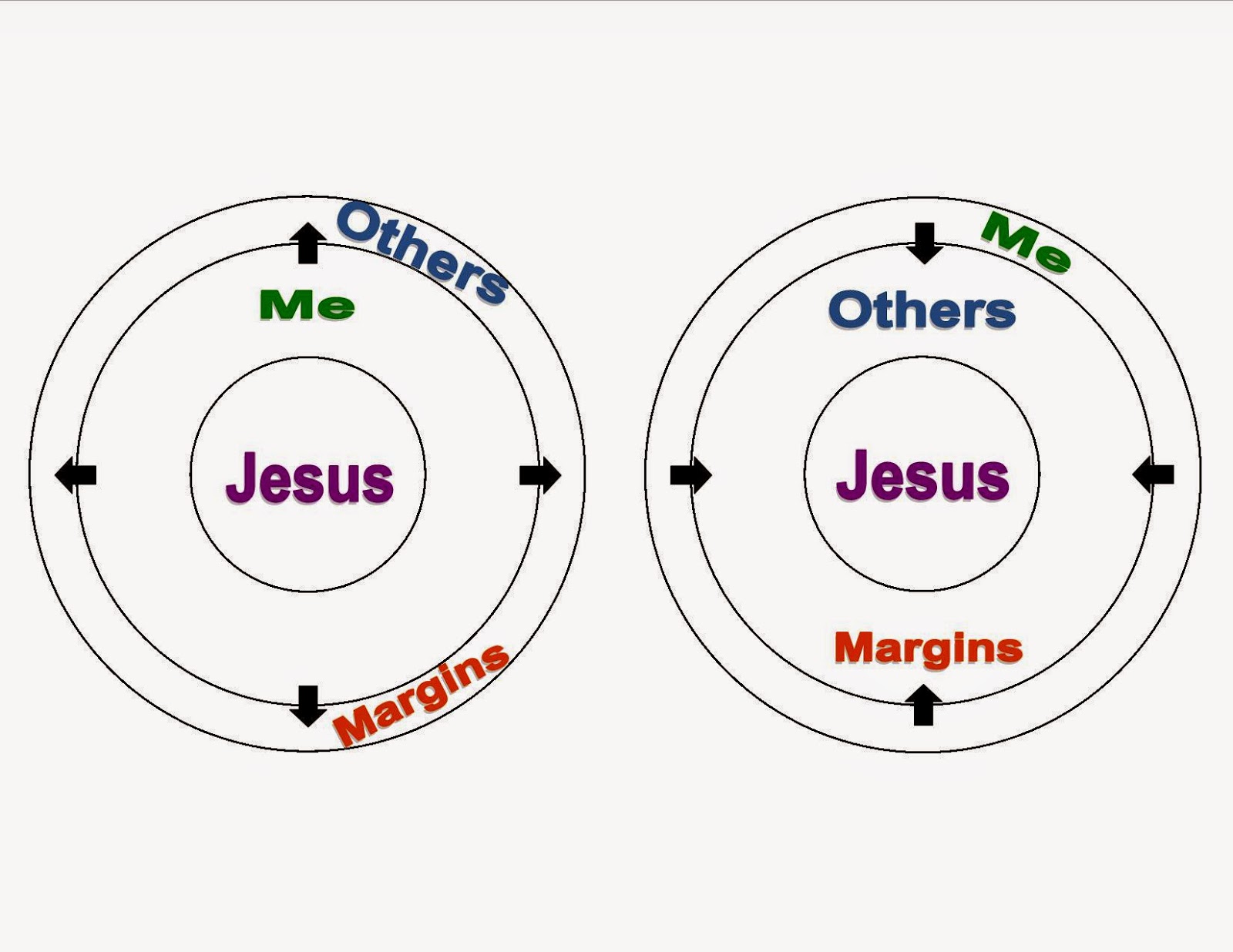 I asked my friend to make up this picture for me, as I've been visualizing and experiencing this so often lately, and I need to begin to net it out in words.

The two pictures are a contrast in two ways of seeing and being and acting in the world, and the paradigm shift from left to right is fundamentally important as we consider serving others.

For the longest time in my Christian walk, I saw things in the way of the image on the left.  Jesus was central.  Next, I saw myself and those whose lives basically seemed similar to mine, and finally, there were those on the margins; those I considered "other"or different than me.  I read the Bible as if Jesus commanded me to go 'out' to the margins and bring them into my circle.  I used to consider the 'margins' as people who were far away...whether that meant geographically, socio-economically, spiritually, racially, culturally, educationally...and needed to be brought in. Though I considered my view to be about Jesus-centered service, this view is really quite me-centered and centered in the world's power and values.  Phrases like "invest in others", "serve the poor", "bless a broken world" have come from a mindset that I'm less broken due to my position in the world. The book Walking with the Poor calls this my "god-complex".

The more accurate Kingdom lens is on the right.   Jesus is central, and those on the margins are next.  Those who live on the margins of the world's power far outnumber those of us who have privilege and power.  Where did Jesus enter in? On the margins.  He invites us to also enter in and to come closer to His heart for the poor, the oppressed, the vulnerable, the forgotten.   Philippians 3:10.."That I may know him, and the power of his resurrection, and the fellowship of his sufferings."   This view is more about the resurrection power of Jesus, not worldly power.  He invites us to share in the fellowship of his sufferings.  My blessing a broken world is more about me entering into the pain, the suffering, the need, so that I might more accurately see myself (and my own brokenness), more accurately see others, and more accurately see Jesus.  This movement in toward the heart of Christ is more about humility, dying to self, joining with, sacrifice, service, solidarity, the fellowship of the suffering.  This is the movement of transformation, centered first in Jesus, and then in others.  In this movement in, I walk the footpath of Jesus...presence, proximity, and powerlessness... into blessing and community and Kingdom power.

One of the books I'm reading at the beginning of this year is called Living Without Enemies: Being Present in the Midst of Violence written by Samuel Wells and Marcia A. Owen.


An excerpt about violence from what is a timely word written in this age of seemingly growing gun violence in our world:

Violence is the moment of rage when a lingering trust in physical or technological force floods the imagination with an apparently instant solution to an otherwise paralyzing powerlessness and fear. It is a desperate attempt to assert short-term physical control in a situation that is psychologically out of control.  In a spiritual sense, violence is a profound forgetting.  It is a forgetting of the past-that I have been created for a purpose by a God who wholly knows me and at the same time wondrously, wholly loves me.  It is a forgetting of the present-that I am a child of God, that those around me are my brothers and sisters, also created, known and loved by God.  And it is a forgetting of the future-that God is drawing all things together into a profound and peacable unity, where there is a place for everyone in a harmony of God's composing.

How might we describe the opposite of violence?  Like this:  "Love me, so that I may love you, so that we may love one another."  That's our purpose, that's why we were created, that's the ticket to profound peace."  The peace of God resides in belonging, in knowing that we belong to all things, to all people, and that is our purpose.  We were created to love.

If gun violence were more visible, this psychological problem, the sense of rage and powerlessness and fear, would have to be owned and addressed by everyone.  But the wider society has reached a consensus around two incompatible convictions.  One is that those with this psychological problem are a tiny minority, and they can be disregarded by the majority of the population because they are assumed to be of a specific class and race other than the majority's own- and thus assigned to a category that is "not us".

The other conviction is that we all, nonetheless, need a gun.  During her many years of involvement with the problem of gun violence, Marcia has seen over and over how and why people say, "I need a gun.  By asking me to disarm, you are putting me at risk."  But having a gun is not a solution.  We have gone so far from Christ's teachings that we see ourselves as being separate from one another.  One way not to have a problem is to deny the problem by saying, "It's not my problem.  I have a house, and I'm going to get a security system, and I'm going to get a weapon, so that I'm ready to kill someone"- a person who is in reality my brother or sister-"so that I can save my life."  So, what in us makes us reluctant to call gun violence our problem?  Fear, and a forgetting of our soul.
(pp. 51-52) 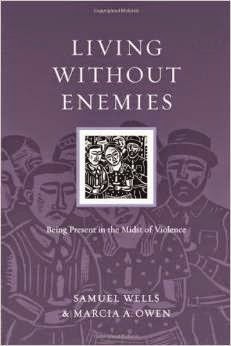 learning to feed yourself

Amy Wiles is a friend and the pastor of First Presbyterian Church located in the Walnut Neighborhood.  I loved her latest cover article in their church's most recent newsletter:

In the 2012 Beecher Lecture Series at Yale Divinity School, Rev. Dr. Anna Carter Florence compared some Christians to teenagers standing in front of a well-stocked refrigerator.  Teenagers feel a twinge of hunger, open the door, survey the food, and then turn to their parents to announce that there is nothing to eat.

Of course, that's not true.  What they really mean is 1) that the food is in whole form and has to be prepared in order to eat, 2) they don't know how to cook it, and 3) they would really like someone to do it for them.  Some parents take on that role and never give it up.  But if you want your kids to be independent, eventually you have to show them how to fix what is in the fridge so that they can feed themselves.

Each of us has a spiritual hunger for God, and we have been given a beautifully stocked fridge- The Bible.  Yet, so many Christians open up the Scripture and declare that there's nothing to eat.  Of course, that's not true.  What they really mean is that they don't know how to read the Bible.  So, they turn to the preacher or teacher and expect them to cook something and then feed it to them.

At the end of the day, each of us is responsible for our own spiritual growth.  Our relationship with God is deeply personal.  So, it is important for each of us to read Scripture and listen for how the Spirit is calling us to meaningful ways of discipleship.  It's essential for us to learn how to feed ourselves.

So akin to consumer Christianity is this demand to be fed from the front rather than feeding ourselves!   This article helps me to recommit to helping others create and engage Spiritual Growth plans for themselves.  It also made me ask the question, "How many meals have I taught my two teens to make with that food in the fridge?"  Uh, oh.  I'd better get busy.  :)

David Oyelowo:  “I truly believe that the film has potential to be an agent of much-needed healing for this country. The devil doesn’t enjoy that.”
But plainly, this was a movement conceived and led by black people that changed the trajectory of the nation, and showed again how change usually comes first from the outside of power, not the inside, and from the bottom and not the top of society.
We can’t ignore the timing of this film. Out of the many biopics Hollywood has produced in the past 50 years, this is the first theatrical release on Dr. King. In light of Ferguson, Staten Island, and the marches throughout the country calling for racial justice, the film’s subject matter is all the more compelling and its timing more opportune.
According to Oyelowo, “We wrapped on the third of July. Michael Brown was killed on the ninth of August. There was no way that we could know a historical film could feel as relevant as it is in the shape of Selma. I think God knew all along.”
This is the end of a recent interview with David Oyelowo (star who portrays Martin Luther King Jr. in the movie "Selma") by Sojourner's Jim Wallis.  Read the full article/interview here.
Please see this movie this month in a theater near you.