I talk a lot about Christian Community Development.  If you watch the 3 minute video above, you'll see a tremendous model of it happening in Haiti!
Posted by Laura Hoy 4 comments:
Email ThisBlogThis!Share to TwitterShare to FacebookShare to Pinterest

Dave Gibbons leaves his listeners with 3 questions (in an interview by Wendy Seidman  in a 2009 supplemental Global Leadership Summit conversation):

When you think about your hand think about the nail print hand of Jesus in the middle.  Think of pain.  So, what is your pain?  Your pain will often guide you better than again your strength.  God allows the pain to dictate who you maybe are feeling compelled to serve.  But also, your pain gives you resonance.  It gives your voice authority cause this world doesn't relate to your accomplishments, to your degrees, to your gifts, but they immediately relate to your pain.  So, your pain is your platform.  It's your voice of authority.  It's your credibility to the world.  Cause remember most of the world lives in suffering.  It's a norm.  They don't live the happy life.

And the last thing is when you think about the hand think about the outskirts of your hand.  Think about the fringe.  Who are the fringe?  Mostly the American movements focus on the masses.  Cause we're thinking we gotta grow our churches..it's a numbers game again.  But I realize Jesus' style, he cared about the masses but he really focused upon the few. And you see intentionality about the fringe, the outsider, the mutants, the misfits, the  freaks of a culture.  The ones who weren't seen- many times they were children and even the women.  So, who are the fringe in your local community? That will guide you in terms of who you actually need to serve and minister.  That doesn't mean we forget about the people like us. But in terms of what we're known for, what's beautiful again, is that we love our neighbor, our neighbor is someone not like us, who's uncomfortable many times to be around, who's maybe even offended us, but as we love these people that's when people realize that's supernatural and that's when they take a closer look at who Jesus is."
Posted by Laura Hoy 2 comments:
Email ThisBlogThis!Share to TwitterShare to FacebookShare to Pinterest

I never reported on the fabulous job the Youth Art Team students did in preparing and presenting "Night at the Five Sullivan Brothers Museum" on March 24.  The students did a fantastic job writing and practicing lines, making the setting and props, and offering what they had to Jesus so that He might multiply their gifts!  The play was presented at Harvest and Orchard Hill and had wonderfully supportive audiences!

Two highlights of many:

Albert Sullivan was the only brother who was married with a child when he went off to war.  His granddaughter, Kelly, came to the performance and can be seen in the video with the Youth Art Team.

Also, the students raised close to $500 through admission for the African American Museum in Waterloo.

Read more at www.youthartteam.blogspot.com if interested!
Posted by Laura Hoy No comments:
Email ThisBlogThis!Share to TwitterShare to FacebookShare to Pinterest

the acceptable year of the Lord 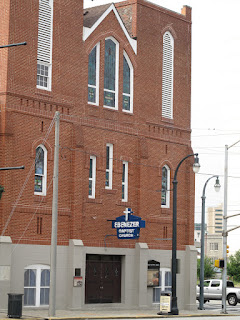 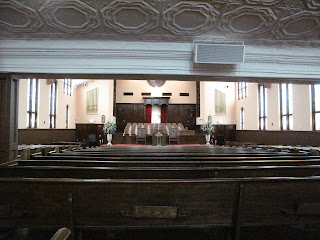 Last week I visited the Martin Luther King Jr. Historic Site in Atlanta, GA, and found myself in the back of Ebenezer Baptist Church listening twice through an audio of his sermon "Guidelines for a Constructive Church" .  He started his sermon by mentioning how the Supreme Court, in 1955, stated guidelines that every school district should integrate "with all deliberate speed".  The year he gave his sermon was 1966, and he mentioned that only 5.2 percent of the African-American student population had been integrated in the South over those 11 years. He shared that at the rate integration was happening, it would take another 96 years to integrate the public schools in the South.  As he spoke these words, I watched four different school tours come into the sanctuary.  All were African-American; there was one white female in the whole of these four classes...and we're 46 years past King's sermon.  Hmmm.

After talking about the Supreme Court's guidelines, King also went on to share that Christ's Church has some guidelines, too.  "The guidelines are clearly set forth for us in some words uttered by our Lord and Master as he went in the temple one day, and went back to Isaiah and quoted from him.  And he said, 'The Spirit of the Lord is upon me, because he hath anointed me to preach the gospel to the poor, he hath sent me to heal the broken-hearted, to preach deliverance to the captives, and recovering of sight to the blind, to set at liberty them that are bruised, to preach the acceptable year of the Lord.' These are the guidelines."

He then went on to give several examples of "the acceptable year of the Lord".  A few:

"The acceptable year of the Lord is that year when men will keep their theology abreast with their technology."

"The acceptable year of the Lord is that year when men will keep their morality abreast with their mentality."

"The acceptable year of the Lord is that year when men will will do unto others as they will have others do unto themselves."

(read sermon for more)
How would you finish the sentence, "The acceptable year of the Lord is the year that..."?
Posted by Laura Hoy No comments:
Email ThisBlogThis!Share to TwitterShare to FacebookShare to Pinterest

As some of us around town talk passionately about how CCDA (Christian Community Development) has been an important vehicle over the past six years for training, inspiration, and connection, we often get asked, "What is CCDA?"  This note from the CEO, Noel Castellanos, and the video below, help define CCDA...and who it is more so than what it is.

A new friend of mine (who had very little prior exposure to CCDA) attended our recent week-long Immersion in Chicago to learn more about our association. She was blown away by the experience. While she gave rave reviews about the quality of our instructors, the compelling curriculum, and the amazing leadership provided by Dave Clark and our entire staff, what made the biggest impression on her was the attendees’ personal connection to the movement of CCDA.

Although many of our founders and leaders, such as John Perkins or Wayne “Coach” Gordon, have inspired us over the years with missional lives that embody CCD (Christian Community Development) and charismatic messages, CCDA is not any one person. CCDA is not an organization that mandates ministry activity or controls grassroots efforts. CCDA not a funding provider (although we want to empower our ministries to become more sustainable). And neither is CCDA primarily a political or social movement—although our work requires both social and political engagement on behalf of the poor.

CCDA is, rather, a God-inspired, Spirit-led, Kingdom-centered movement of radical Christ-followers, who are passionate about entering into the pain of the poor in their communities and who are praying for and working towards the wholistic restoration of all that is broken.

Oftentimes, I haven’t been sure quite how to talk about our members because I can easily switch between saying “they,” or “you,” or “us.” I will be forever grateful to Scott Lundeen, who created our "I Am CCDA" conference video and tagline a few years ago, because it perfectly captures what I believe is at the core of who we are.

As CCDA, we want to see expressions of “neighborhood-focused church-life” thrive in communities that have often been neglected by the church at large and society. And we know that CCD ministry work is crazy, messy, exhilarating and challenging. But it is work that is connected by a broad movement we call CCDA—an association that is stewarded by our board and national office staff, but—that is ultimately fueled by YOU, our members.

Over the past month, I have met with and spoken to many CCDA board members, individual and organizational members, funders, partners, conference sponsors, Cohort participants, staff and Immersion attendees about CCDA, and I, too, am blown away by our collective love and passion for this movement—raised up “for such a time as this.”

When I consider all that God is doing through CCDA and other ministries to lift up the cause of justice in our world, I am drawn to the prayer of Jesus (from the ‘hood of Nazareth), who asked us to pray this prayer to our heavenly Father: "Thy Kingdom come, Thy will be done, on earth as it is in heaven." Together, I am convinced we can faithfully see Jesus' prayer for Kingdom presence become more of a reality in under-resourced communities across our world.

Finally, I encourage you to join us at our National Conference in the Twin Cities, September 26-29, 2012, and to remember: "Yo soy, tu eres, nosotros somos CCDA" (I am, you are, together we are, CCDA).