Through these conversations, there were several neighbors who voiced their desire for more productive activities for children of the neighborhood.  It was through listening to the community, that a weekly gathering started up for young people in the neighborhood.  Whiffle ball, chalk drawing, jump rope, dancing, acrobats, drawing....young people gathered with a small group of caring adults for a few summers of weekly recreation.

What did we notice?  How wonderfully expressive and artistically free children are!  It was out of these relationships with Walnut neighborhood children and young people from Harvest Vineyard and Orchard Hill churches that the Youth Art Team was birthed in 2010.

And oh, how Youth Art Team has grown and blessed our community over the past nine years!  Come celebrate 9 years of God's transforming beauty, creativity, love, and peacemaking through these young people!

This quote spoke to my interior pilgrim this morning!

"Through a profound rhythm of journeying, encountering sites of pain and hope, engaging the history and culture, serving and being present with those on the margins, worshiping, resting and reflecting, pilgrims are slowly confronted by a different world that begins to interrupt their own.  Pilgrimage is a posture very different from mission.  The goal of a pilgrim is not to solve but to search, not so much to help as to be present.  Pilgrims do not rush to a goal, but slow down to hear the crying.  They are not as interested in making a difference as they are in making new friends.  Pilgrims set out not so much to assist strangers but to eat with them."

-Chris Rice and Emanuel Katangole, from their book Reconciling All Things
Posted by Laura Hoy No comments:
Email ThisBlogThis!Share to TwitterShare to FacebookShare to Pinterest


If you watch the first 18 minutes of last night's Waterloo, IA, City Council Meeting, you will be able to hear the proclamation I shared yesterday and you will see a 6 minute video of our Vision Trip to the South last month.

I had the pleasure of joining others at the Waterloo City Council Meeting tonight to stand with Mayor Hart as he read this Human Rights Proclamation over our community:

WHEREAS,
On December 10, 1948, nations from six continents came together to adopt the Universal Declaration of Human Rights.  This extraordinary document affirmed that every individual is born equal with inalienable rights, and it is the responsibility of governments to uphold these rights.  In more than 430 translations, the Declaration recognizes the inherent dignity and worth of all people and supports their right to chart their own destinies.  On the anniversary of this human rights milestone, we join with all those who are willing to strive for a brighter future, and together, we continue our work to build the world our children deserve; and
WHEREAS,
We want our children to lead healthy lives and pursue an education without fear, and when citizens are empowered to pursue their full measure of happiness without restraint, they help ensure that economies grow, stability and prosperity spread, and communities flourish.  Protecting human rights everywhere extends the promise of democracy and bolsters the values that serve as a basis for peace in our world; and
WHEREAS,
It is our obligation as free people to stand with courageous individuals who raise their voices to demand universal rights.  Under extremely difficult circumstances – and often at grave personal risk – brave human rights defenders and civil society activists throughout the Cedar Valley are working to actualize the rights and freedoms that are the birthright of all humankind.  We will continue to support all those who champion these fundamental principles, and we will never stop speaking out for the human rights of all individuals, at home and abroad.  It is part of who we are as a people and what we stand for as a Cedar Valley United; and
WHEREAS,
We honor those by continually working to protect the personal dignity of all Waterloo citizens regardless of race, gender, religion or non-religion, ethnic background, sexual orientation, national origin or ability and to ensure social, political and economic freedoms and opportunities for all;
NOW, THEREFORE, I, Mayor Quentin Hart, do hereby proclaim Monday, December 10, 2018, the official recognition of International Human Rights Day Celebration in Waterloo, and the official kick-off of a city-wide “2019 Human Rights Corridor of Activity.” This “Corridor of Activity” features round table discussions, theatrical productions, community book-reads, the inimitable  Waterloo Freedom Bus Tour™, and celebrates 51 years since the assassination of the beloved Reverend Dr. Martin Luther King, Jr., whose servant leadership led to the creation of civil and human rights organizations throughout the nation, including Waterloo Commission on Human Rights.
IN WITNESS WHEREOF, I have hereunto set my hand and caused the official seal of the City of Waterloo to be affixed this 10th day of December 2018.

those who have gone before

I was in Memphis at the Civil Rights Museum a few weeks ago with my neighbor, Willie Mae Wright, a Civil Rights hero in her own right.  Willie Mae told me that she always sits at the front of the bus.

In her own words, "Ever since Rosa Parks, I always sit in the front of the bus.  I just can't bring myself to go to the back.  And when I vote, I never use an absentee ballot.  I always go to polling place to vote after so many have given so much for the right to vote." 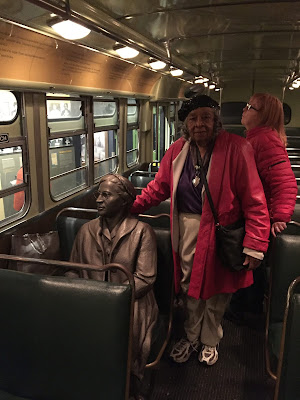 Pastor Abraham Funchess gave our group a folder of materials to read through as we traveled to Memphis on our recent Civil Rights Vision Tour.  One of the articles was a chapter from a book written by Kelly Douglas Brown called Stand Your Ground: Black Bodies and the Justice of God.

In this chapter (chapter 6), Brown writes...

"This is a participation marked by a commitment to freedom, love, and life.  Such participation is a matter of faith."
"God's call to faith is an invitation to become a partner with God in 'the mending of creation.'"
"The Greek word for faith, as used in the Gospels, is pistis.  This word does not suggest a way of thinking about who God is or reflecting upon God's relationship to us.  Rather, it points to a way of acting in light of our relationship to God."
"The only way to change the realities of the world is through moral participation in history."

Brown identifies and articulates so much about ourselves as individuals and as a collective, and even better, she offers some skills and steps to overcome some of the trouble spots we have as humans.

In Braving the Wilderness, Brown talks about the fear and the disconnection that we are experiencing in our lives and helps us address the fear and conflict to move toward one another in courage and love.  It's a much needed read for us in the midst of such divisive times.

"Addressing this crisis will require a tremendous amount of courage.  For the moment, most of us are either making the choice to protect ourselves from conflict, discomfort, and vulnerability by staying quiet, or picking sides and in the process slowly and paradoxically adopting the behavior of the people we're fighting.  Either way, the choices we're making to protect our beliefs and ourselves are leaving us disconnected, afraid, and lonely.  Very few people are working on connection outside the lines drawn by 'their side'.  Finding love and true belonging in our shared humanity is going to take a tremendous resolution."

Brown then goes on to teach us how to "brave some serious wilderness" through four practices. I need her writing to inform and teach me.  I need and am grateful for friends to practice braving in the wilderness so that we might ultimately "become the wilderness".

You can check out the table of contents and reviews of this book here.